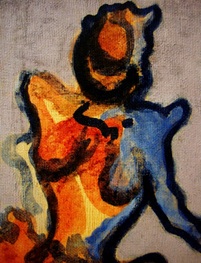 By Rozana Lee
(This short story and illustration was published by Auckland Council in book of anthology : New Beginnings, Winter 2013, New Kiwi Women Write Their Stories)

For the longest time, for as long as she could remember, she did not want to be her.

Born in a country where her grandfather and her father had to change their names.

A country where they had to delete their family history and any traits.  It sounded like hell to her.

Born in a remote town, a place not many people had heard of, until the 2004 Boxing Day Tsunami destroyed the majority of it, left her and her three brothers motherless, her father wifeless & homeless.

She definitely did not wish to be born in a place where Mother Nature was so angry and took her dearest mother away, suddenly, abruptly. Her body was never recovered.

As a little girl, she did not want to remember how she was mimicked and mocked when she spoke in her mother language. She did not want to remember that one day, as she was about to hop on to her  blue rusty bike, on the way to school,  she heard her father shouting at the top of his lungs,  “Quickly, get back inside the house !” She did not want to believe her eyes, seeing people running in her direction and start stoning her, her family, her home, her neighbour - any minority Chinese.  At the time, she did not understand. She wondered what she had done wrong.   She was terrified of them. She was scared of who or what she was. She remembered countless nights, she dreamt of a long free fall and woke up just before she hit the bottom.

She became a legalised copy-papers collector, moving from town to town, boarding house to boarding house, job to job, chasing her dream, carrying a white big plastic folder filled with legalised proof, justifying her very existence in this world. She wondered: if she lost all these papers, would she disappear into thin air ? Many nights, she dreamt of her whole body being twisted like paper until breaking point. She tried calling out for help but no voice came. Her throat was dry and she would wake up gasping for breath just before being torn apart.

Growing up she tried to unbecome herself. Uncomfortable in her own skin, she wanted to be like water but she felt toxic. Fearful of human nature and Mother Nature, she was mostly a lost child, an unwanted citizen. She wished to express how she felt and what was in her mind but time and again, it was just a vacuum, words bent and aired to please everyone, a society, a school, a nation. She wondered why.  As an adult, at nights, now she dreamed of living in a movie world where anyone could say anything, everything.

Fleeting the country with a small brown suitcase, she escaped another Chinese ethnic riot in May 1998. Street fights, windows smashed, cars destroyed, houses burnt, men robbed, stripped naked & beaten, uncounted girls mass-raped, many in front of their parents, wives in front of their husbands. When they resisted, some were stabbed and  left to die.  She ran, took her chances despite being told all roads to the airport were blocked. She succeeded,  hopped into the plane and never looked back.  She loved her country, until her last breath, but she could not live there, not like this.

Twelve years afterwards, the husband she married from the New Land wanted to come home. Arriving there, both at 40 with two young kids in tow, they had no families, no relatives, no friends. Missing home, she was growing older, softer, lonelier, sadder. Her dear husband was as much a stranger as she was to the New Land. At times, she needed an invisible cloak, a familiar voice, a hum from a far away land to span the distance between her and the land where her father, members of her family and many friends had chosen to remain.

At 43, she realised, she had been hiding all her life. She kept seeking the meaning of life, yet not living it.

For the longest time, she tried unbecoming her. She carried herself like a Rafflesia Arnoldii, the corpse flower, inside she was just a lost paper kite.

For once, she realised nobody but her, could be her, at best.

She is not turning her head away anymore. Finally, she has found her words, her voice. She is thrilled to share her thoughts, write her stories,  paint her dreams and many of her nightmares, sing her songs, dance to her own rhythm and live her life.

For once, she is becoming her.